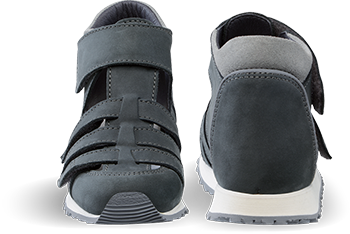 Childhood pigeon toe is a deformation which is frequently congenital and responds well to conservative treatment. Pigeon toe treatment should begin as early as possible in order to prevent long-term harm, so suitable countermeasures are taken from infancy onwards.

Depending on the severity of the misalignment, corrective treatment may be taken in the form of physiotherapy or the use of plaster casts or night splints.
If the misalignment persists until the child starts walking, corrective anti-varus shoes combined with insoles may be used.

The indication for anti-varus shoes is the treatment of walking-age children with forefoot adduction such as pigeon toe, serpentine foot or previously treated club foot.

Expectations for therapy, comfort and normal shoe appearance are met. 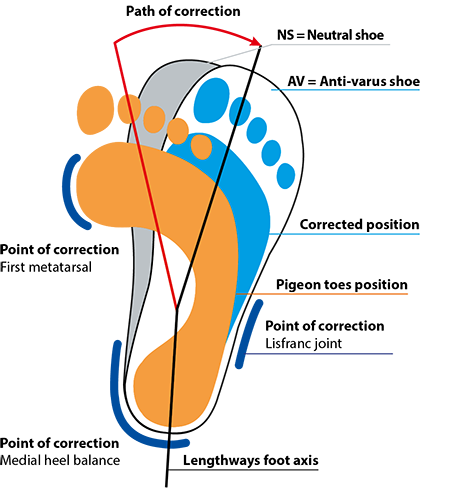 The effectiveness of our anti-varus shoes is founded on our proven three-point correction system:

The first two correction points, on the inside of the heel and at the level of the Lisfranc joint, support the rear foot, thus protecting against torsion in the ankle joint during the necessary forefoot correction process.

The third correction point is on the inside of the big toe’s metatarsophalangeal joint. This promotes correction of the forefoot and prevents the foot from reverting to the deformed position.

To bring about these corrective measures, the anti-varus shoe features a heel cap which extends along the inner side of the shoe. The corrective properties of our anti-varus shoes support successful conservative treatment of pigeon toe. Correction comes into effect where there is outward axial deviation of at least 8°. 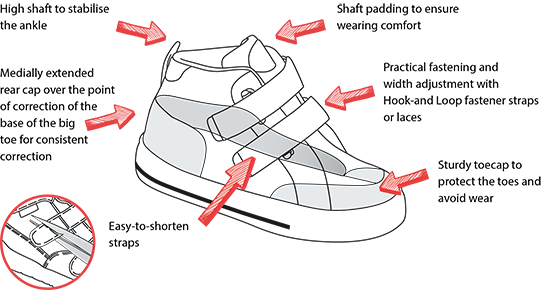 Anti-varus shoes: for secure correction right from the start

At first, many children find it difficult to adjust to walking in anti-varus shoes. The stiffness of the shoe, which is a must from a therapeutic standpoint, is unaccustomed and makes walking more difficult because the foot is forced into the corrected position. However, experience has shown that children quickly become accustomed to the new feeling.

Where each foot requires different care, shoes of differing widths and sizes can be combined without difficulty.
In cases of slight misalignment, therapy with anti-varus shoes can be supported by the following: It is important to continuously monitor the treatment progress in consultation with your doctor.
The earlier your child receives the right care, the easier it will be to rectify the problem.

The sickle foot and clubfoot orthosis for babies is a corrective shoe-shaped orthotic device made of soft leather. To permit variable correction, the sole of the orthosis is divided into two parts. The rear foot is supported by a heel cap, while correction of the forefoot misalignment is done by fitting a tension spring at the other edge of the foot in the Lisfranc joint region. The attachment to the large toe’s joint and the cuboid bone area at the outer edge of the foot guids the forefoot into the corrected position. The orthosis is mainly used for infants and toddlers in the crwaling age. After that, night splints may be used if further corrective treatment of the forefoot misalignment is necessary.

Corrective accessory:
The pigeon toe orthosis for babies is delivered with mounted spring at normal tension, plus two springs for medium and maximum tension and a fastening element.

Depending on the prescription, either dynamic or fixed-position correction is implemented. 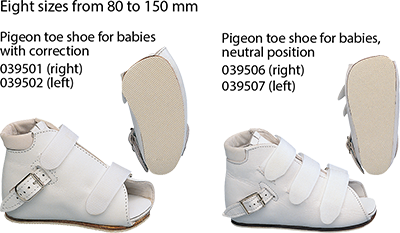 The sickle foot shoe for babies is equipped with a fixed degree of anti-varus correction. The shoe's outsole means that it is suitable for standing and walking. In case of one-sided sickle foot, a neutral shoe is available for the unaffected foot. 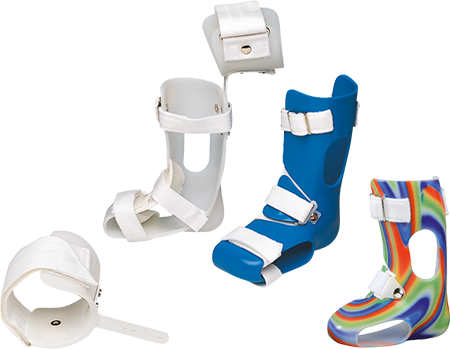 The sickle foot and clubfoot orthosis is a passive corrective orthosis made of polyethylene and used to treat childhood sickele foot and previously treated club foot. The orthosis is a as night splints to correct the forefoot misalignment by the three-point principle.
In case of a slight pointed-foot component, an additional thigh grip can be applied to achieve the desired 90° knee angle, thereby relieving the strain on the calf muscles.